Kathleen Hall Jamieson, Elizabeth Ware Packard Professor of Communication and director of the Annenberg Public Policy Center, will be awarded the 2020 Public Welfare Medal from the National Academy of Sciences at its annual meeting in April.

The National Academy of Sciences announced today that it is honoring Jamieson, a scholar of political and science communication, for her “non-partisan crusade to ensure the integrity of facts in public discourse and development of the science of scientific communication to promote public understanding of complex issues.”

“In an age when misinformation, spin, and confusion about whom to trust threatens our very democracy, Kathleen Hall Jamieson’s nonpartisan, evidence-based approach to science communication and political analysis is an invaluable national treasure,” said National Academy of Sciences President Marcia McNutt. “Her scholarship has been essential to elevating our public discourse and boosting the integrity of science communication. We are thrilled to present her with our highest honor.”

University of Pennsylvania President Amy Gutmann said, “For decades, Kathleen Hall Jamieson’s groundbreaking work has shaped political and science communication. She has changed how we access and think about facts, what it means to have meaningful discourse, and how this affects all manner of politics, from local elections to presidential campaigns. In today’s political climate, this work couldn’t be more crucial, and we’re proud it’s happening at Penn.”

“Throughout her long and exemplary career, Kathleen Hall Jamieson has worked tirelessly to bring science, evidence, and facts to the forefront of our public and political spheres,” said Susan Wessler, home secretary of the National Academy of Sciences and chair of the selection committee for the award. “Her work is strengthening the foundation of an important cornerstone of our democracy — an informed citizenry that is better able to discern fact from fiction.” 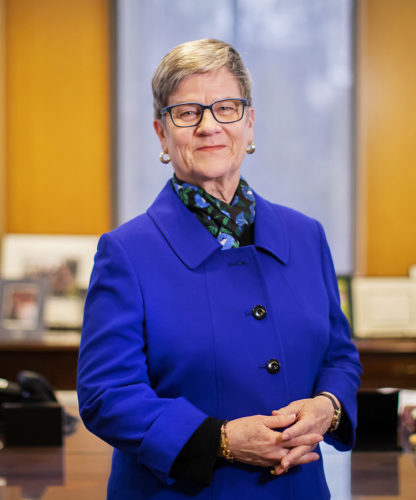 Jamieson, a former dean of the Annenberg School for Communication at Penn, founded the Annenberg Public Policy Center in 1993 to educate the public and policy makers about the role of communication in advancing public understanding of political, health, and science issues at the state, local, and federal levels. In 2003, she co-founded APPC’s FactCheck.org, a nonpartisan, nonprofit “consumer advocate” for voters that “aims to reduce the level of deception and confusion in U.S. politics.”

In 2014, APPC opened an area of study in the science of science communication, focusing on how science can be more effectively conveyed to the public — and why the presence of valid, compelling, and widely accessible evidence has failed to dispel public controversy over such issues as climate change, vaccination, and genetically modified organisms. In 2015, FactCheck.org began to intensively examine the misuse of science in public policy through a new initiative, SciCheck, whose articles have garnered more than 5 million page views.

Books that Jamieson has authored or co-authored have received a dozen political science or communication awards. In addition, her latest book, Cyberwar: How Russian Hackers and Trolls Helped Elect a President (Oxford University Press, 2018), won the Association of American Publishers’ 2019 R.R. Hawkins Award, its highest prize. The second edition of Cyberwar will be published this spring. Jamieson also co-edited The Oxford Handbook of the Science of Science Communication and The Oxford Handbook of Political Communication.

The Public Welfare Medal will be presented to Jamieson on April 26 at the National Academy of Sciences’ 157th annual meeting.